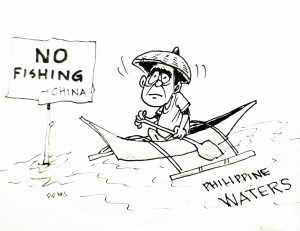 After raising the plight of Filipino fishermen in the West Philippine Sea in his recent bilateral meeting with Chinese President Xi Jinping, President Ferdinand Marcos Jr. got the assurance that China will find a solution to allow Filipinos to fish in ‘natural fishing grounds’.
Much as we welcome this development, we are not sure if the Chinese president will fulfill his promise, given China’s similar assurances in the past that it did not fulfill. When it comes to maritime disputes in the West Philippine Sea, China is known for saying something but doing another thing. In short, they are just good at making promises that they do not honor.

Unfortunately, China’s delayed action is something that Filipinos cannot wait for. It’s the action to finally allow Filipino fishermen to freely fish in the West Philippine Sea. Funny but China is disallowing them to fish in our territorial waters, within the 200-mile distance from our shores which, according to the international law of the sea, is rightfully ours.

Imagine China, imposing a fishing ban in the waters where the Philippines exercises “sovereignty, sovereign rights and jurisdiction.” What is that? Is it not an act of bullying and intimidation? At any rate, we can only resort to diplomatic efforts, hence the series of protests that the Philippine government has been filing against China.

Now we have become like beggars, at the mercy of the giant bully, begging to be allowed to fish in our waters. Poor Philippines! That lobbied assurance for a solution to finally allow our fishermen to fish is not an achievement at all. It is their right. They should not have been banned from fishing in our territorial waters in the first place.