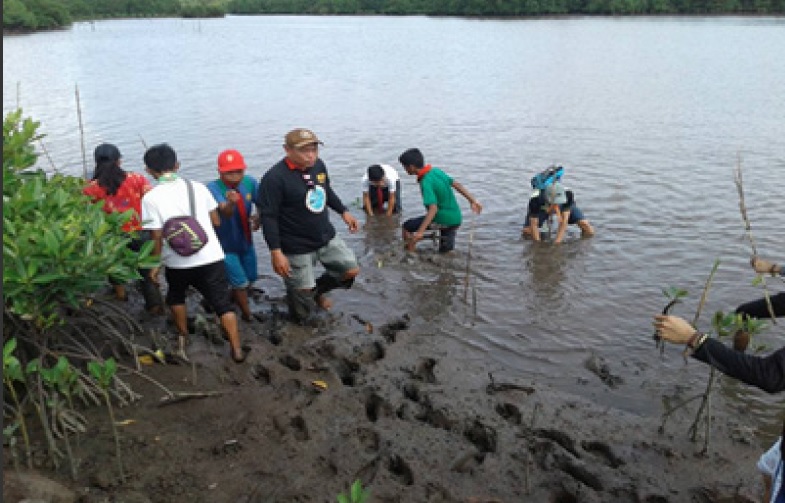 BABATNGON, LEYTE- At least 5,000 mangroves or bakawan propagules and 150 Talisay Trees were successfully planted by the active scouts who are members also of the Science Club of San Agustin National High School now Emeterio-Federica Gerez National High School in the seashores along San Juanico Strait in Brgy. Uban, Babatngon, Leyte during the Scouts Environmental Camp.
The said mangrove planting conducted by the scouts is an active voluntary support to hectares of mangrove plantation spearheaded by Hon. Rogelio B. Fabi Jr. of Brgy Uban, Babatngon Leyte, who is presently one among the barangay chairmen who received a national award on mangrove planting.
As part of the effort of the barangay council through Hon. Rogelio B. Fabi Jr. abandoned fish ponds were replanted with mangroves.
It is known that rampant cutting of mangroves was practiced before by the community folks and other illegal cutters from nearby barrios including big personalities who converted hectares of natural mangrove forests to fishponds resulting to mangrove deforestations and high tides that invaded hectares of rice lands not only of Brgy. Uban but of nearby barrios like Brgy. Gov. Jaro and Brgy. San Agustin.
Mr. Ronelo M. Hidalgo, school scouting coordinator and Local Coordinator on World Scout Environment Education Program – WSEEP has been actively supporting mangrove planting in this area with their scouts and students since before typhoon Yolanda hit Leyte, but now that the barangay chairman is very active a more strengthened partnership is a big challenge for everyone.
Moreover, Brgy. Uban is the barrio where hundreds of dead bodies of Typhoon Yolanda victims drifted from Tacloban City through the storm surge which affected also nearby barrios due to almost 10 feet high tides at that time.
More collaborators and school stakeholders are invited for their active support to SAVE this Mangrove Beach Forest and to protect hectares of rice fields from possible damage caused by high tides or rise of sea water.
(Note: The author is Teacher III and school scouting coordinator/activity organizer of Emeterio-Federica Gerez National High School in Babatngon)