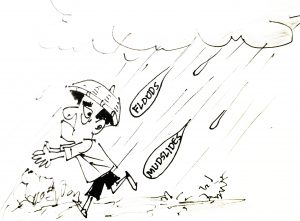 The heavy downpours and almost incessant rains that we experienced here in Eastern Visayas in the past days due to the low-pressure area had once again uncovered the extant problems that we have had in this part of the country, unresolved up to this time.

Indeed, the recent LPA was such a stubborn weather disturbance. It moved so slowly, skirting the eastern parts of Mindanao and Visayas, and bringing with it thick clouds of rain that did not seem to halt. There have been LPAs in the past, some even evolving into typhoons, but they did not cause as much rain as this one did.

And so, after days of frequent rains, these recurrent problems surfaced, the first noticeable one being flooding in many areas. Many densely populated communities, barangays, towns, and cities were quickly flooded. Supposedly, the accumulated rainwater on the ground need not be a problem as this water should merely flow down the rivers and other waterways into the sea. But due to poor drainage planning and rampant filling of waterways, water is instead trapped in many areas, hence those floods.

Landslides or mudslides are another consequence of heavy downpours, which is a normal occurrence in many areas of the region. This does not happen in mountainous areas where the soil is intact and protected by forest covers. But due to the wanton cutting of trees and deforestation in general, highlands became prone to landslides that sometimes destroy lives and properties.

The litany of problems that recur when the incessant rains come could go on, but the point is, we should learn from these problems and then do the necessary steps to address them. We call on the authorities to take the initiative, and the people to participate and cooperate. These woes do not come during the dry season, so somehow we should thank the rains for bringing them to our attention. But we should work together to resolve them.