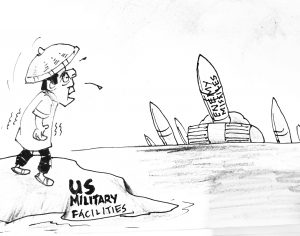 If not for the Chinese bullying and militaristic approach to resolving the West Philippine Sea maritime disputes, the presence of American military bases and troops in the Philippines is good as useless. But the government allows it primarily because of the Chinese threat; so that, should the tensions escalate into an armed confrontation over the disputed waters, the country would have a strong ally to count on.

Generally, this is how most Filipinos regard the presence of US forces in the archipelago—more of a ‘savior’ to whom we should be endlessly indebted. As such, we become overly accommodating to Uncle Sam, tolerant of their occasional ‘abuses’, and quick to meet their demands. Again, we need not behave this way had China been depriving them of a justifying reason, were it not for an impending armed conflict that we cannot handle on our own. We can therefore blame China that we are compelled to act this way.

Are the US troops really here to protect us should war erupt? Is it really the reason why they are here? Historically, and based on how the United States operates in various places, the answer is no. They are here to protect their interests, not us. They are just good at making their presence appear messianic, and at making us repay for this ‘indebtedness’; but the truth is, they don’t care for us at all and are just using us in whatever possible manner.

In countries where they maintain military bases and facilities, they pay massive amounts of money for rent, but in the Philippines, no way—they stay for free. What’s the difference? Because those countries are beholden to them as well? It’s not that. They just can’t fool those people and do away with their rental obligation. That’s why they have to pay. They are more respectful to those people than they are to us.

In the event of war, what benefits shall we get for having US troops on our soil? Our country will surely be targeted by enemy missiles and bombardment attacks, especially in the areas where US military facilities are located. We will become the venue of their war while our lives and properties are being reduced to ashes. But in terms of protection that US forces can provide, that’s a remote possibility. More likely, it’s just a pigment in our imagination.