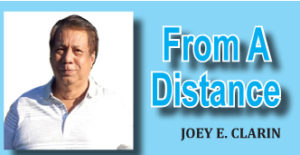 We recently marked the 34th Anniversary of the People Power revolt. A Filipino people celebrated the legacy of the country’s bloodless revolution that led to the restoration of democracy in our country.
After 34 years, we continue to face challenges because there are attempts to destroy the essence of the revolution. May the EDSA revolt serve as a warning to those who attempt to suppress our freedom with an iron first. The bloodless revolution is proof that Filipinos can stop abuses and corruption in our country.
It is very important to remind all of us to reject abuses and dictatorship. We have proven that Filipinos can work together and oppose abuses and dictatorship. It is important to reminisce about the lessons we have learned from the EDSA people power.
We have to learn from the lessons of people power and acknowledge that in the end, the strongest equalizer against abuses and tyranny are the people who act and stand up.
More than 3 decades since the EDSA revolt, our continuing duty is to remember. It is in remembering that we protect our country against all forms of human rights violations arising from authoritarian power.
We therefore honor the valiant heroes of EDSA and the countless others whose lives were touched by the bloodless uprising.
EDSA People Power was a catalyst for the restoration of our democratic institutions. The People Power Revolution remains one of the most remarkable events in our nation’s history. We have to defend and preserve the freedom we gained during the 1st EDSA People Power.
We pray that the legacy of EDSA will remain relevant in the years ahead.