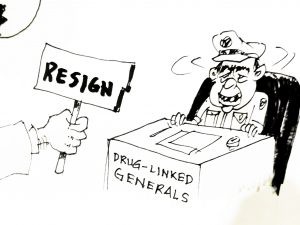 Given the extant illegal drug problem in the country, police generals and other authorities have repeatedly been linked to it over the years, which is not surprising since that’s the very reason why it is never eradicated—because some high-ranking authorities are behind drug proliferation.

Even former president Rodrigo Duterte had hinted over and over that some generals and other high-ranking men in uniform are engaged in the drug trade, protecting its operations from being halted by those authorities who are serious about putting an end to this menace. As a big syndicate, it never ceased despite the old man’s bloody war against it.

Now that this crackdown has obviously weakened, the drug trade’s key players are back to business. Their operations show no signs of stopping since big money is involved, and they richly benefit from it. When huge amounts are at work, even the principled authorities yield to the temptation and eventually become protectors of the illegal activity, even facilitating the complications and difficulties that stand in the way.

Supposedly, it’s a heinous crime by these authorities, but concerned government watchdogs are only urging them to resign from their positions. Why just resign? For sure, they will not do that! The government should sue them in court, dismiss them from service, and put them behind bars. That’s what they deserve!

That’s the problem with this country’s justice system—when the accused are small figures, the laws are harshly applied. But when the offenders are wealthy, powerful, and influential, the laws are powerless. If small drug users lost their lives in the drug war, then why can’t these generals be at least fired from their jobs and placed in prison? Where are the fairness and justice that people are longing for?