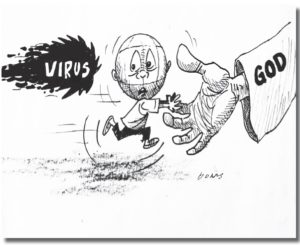 To cough and sneeze were just ordinary ailments in the past and was simply named as colds or flu if it gets serious. Very seldom was it identified as the cause of immediate death. Tuberculosis which also emits similar symptoms of coughing was not deadly but makes a victim live for sometime before the victim dies.
And now we have corona virus disease (COVID-19) which has similar symptoms of coughing and sneezing but with a difference. It is fatal. It kills. And it has spread worldwide and has caused thousands dead. It affected our country recently and one has died with several hundreds affected by this disease.
We only have few suggested approach to level ourselves to safety. We learned that negative and deadly incidents like this is a message to us God-created humans. We have defied God’s will for us to live a clean and saintly life. But material wealth and power has become an ambition and part of our personal desires. This has become a way of life. So God sends us this message and warning. So, reform – let’s go back to being simple and God-fearing lives. And let us constantly PRAY!!