DOHA – Lionel Messi has won the Adidas Golden Ball for Qatar 2022, with Kylian Mbappe and Luka Modric claiming the Silver and Bronze Balls. 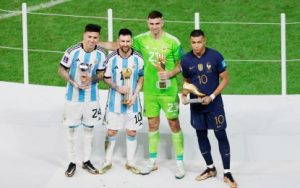 Lionel Messi has become the first man in history to win the prestigious trophy twice; the first was at Brazil 2014, where he helped Argentina finish as runner-up.

Argentina’s brilliance must have thought he won it three times on an incredible night in Lusail Stadium, when Messi and Kylian Mbappe lived up to their heavyweight billing.
Their talisman opened the night and appeared to be on his way to a comfortable victory until France rallied from a 2-0 deficit to force extra time.

Argentina’s lead was restored by Messi’s goal, but Mbappe equalized for the second time. Messi and Mbappe both scored early in the shoot-out, but Emiliano Martinez saved from Kingsley Coman and Aurelien Tchouameni blasted wide, allowing unheralded Gonzalo Montiel to convert the game-winning penalty attempt.
(WAM/PNA)