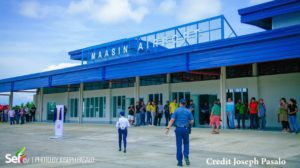 HINUNANGAN, Southern Leyte – A local airline will soon be servicing the Maasin City Airport according to this town local chief executive.
Mayor Elisa Cadingan said that a 30-seater Fairchild-Dornier 328JET will soon fly the Manila-Maasin route in preparation for the surge of tourism in time for the founding anniversary of Southern Leyte this July and the 500 years celebration of the First Easter Mass in Limasawa on March 30, 2021.
Cadingan added that the plane to be used is owned by her family, Orient Aviation, a flying school located in Pasay City.
The town mayor’s husband, Romel, is the assistant director general of the Civil Aviation Authority of the Philippines’ flight standards inspectorate services.
Cadingan added that they chose to name the airline Air Southern Leyte as way to promote their province that is not only historical but also rich of natural attractions and tourist destinations that needs to be promoted and marketed to local and foreign tourist.
“If there is a flight going and coming directly from the province, this will greatly help in boosting the promotion of our tourism sites,” she said.
She added that initially, they are planning for a thrice a week flight but would increase its number of flights, depending on the demand of passengers.
Having an airline operating in Maasin City Airport will help and ease the burden of airplane passengers from traveling for almost four hours from Southern Leyte to Tacloban City where the Daniel Z. Romualdez (DZR) Airport is located.
The operation of the plane in the province will also help the promotion of tourism in their area.
Cadingan added that it was her husband who first thought of offering a flight from Maasin to Metro Manila but only materialized when Governor Damian Mercado talked with her last January.
In 2018, the Department of Transportation and the Civil Aviation Authority of the Philippines inaugurated the Maasin Airport also called the Pana-on Airport passenger terminal building that now has a capacity of 300 passengers per day.
The inauguration came after the aviation company Air Juan opened its Maasin-Cebu, Maasin-Tagbilaran flight using a 9-seater Cessna commercial plane. However, the company stopped their operation in the province after several months.
(ROEL T. AMAZONA)