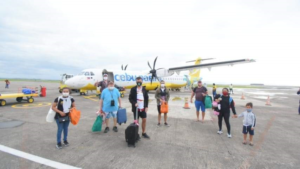 TACLOBAN CITY – At least 57 foreign tourists who were stranded here in the region were assisted by the Department of Tourism (DOT) to return to Manila via chartered flight.

These foreign tourists were affected by the Luzon-wide lockdown which resulted to the stoppage of air flights at the Ninoy Aquino International Airport (NAIA).

They were among the 7,915 tourists who were assisted through sweeper flights to NAIA and Clark International Airport with the help of Philippine Airline, Cebu Pacific, Air Asia and Air Swift.

The tourists were flown out at the Daniel Z. Romualdez Airport past 10 a.m. through Cebu Pacific on March 26.

The sweeper flight is a program of the DOT and the Civil Aviation Authority of the Philippines.

The tourists came from various places of the region.

“There are still foreign tourists left in the region but so far that is the only sweeper flights given to us by the central office,” DoT8 Director Karina Rosa Tiopes said.

“They fall under the exemption of entry prohibition in Metro Manila,” Tiopes added.

Before boarding their flight, the stranded tourists during their arrival at the pre-departure area were instructed to follow the health departments COVID-19 protocol which includes body temperature test and disinfection or sanitizing procedure.

The tourism sector was the first to feel the effect of COVID-19 pandemic after tourist destinations and hotel operations were shutdown.