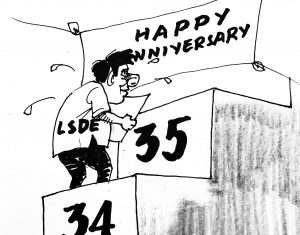 This month or this 22nd day of December to be exact, the Leyte Samar Daily Express will be celebrating its 35th year anniversary after three decades of consistent, fair, and balanced print journalism in this Eastern Visayas region.

Indeed, many local papers come and go, as the trend reveals for decades now. Some would emerge with a big bang and then flourish in the succeeding years. But after a few years of existence, they die down, some through natural deaths, others through controversies, and the like. They create much noise, fanfare, and big names in print media, only to end up silent in the long run for some inevitable reason.

Despite this trend, though, the Leyte Samar Daily Express and its sister newspapers in other provinces in the region remained steadfast and firm against numerous challenges and the passing of time. Since its emergence, it had come of age and matured through the years, responsible enough not just to its clients but to its employees as well via necessary benefits and pay hikes that they badly needed, hence its continued and consistent operations.

This year, once again, the LSDE management and personnel take pride in announcing to the public, particularly in Region 8 that the newspaper is very much alive and active in serving the people. It renewed its commitment to take the leadership in print journalism in this part of the country, vowing to uphold the ideals of print media, especially in this era of fake news and misinformation that had characterized the contemporary media.

To the management and staff of the Leyte Samar Daily Express, our snappy salute, and commendations. May the heavens continue to shower more blessings on this substantial local newspaper of Region 8. Congratulations on its 35th year anniversary. Happy Anniversary!