Nothing else in the world…
Not all the armies…is as powerful
As an idea whose time has come.”–Victor Hugo 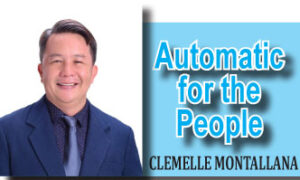 With the first sign of the dawning of a new election season, we at the sidelines are seeing how fervent and how vigorous the positioning of our politicians. The tenacity of the said positioning of our traditional politicians are enviable, if only these per positioned alliance can be similar or half the tenacity that our leaders does in times of calamities?
The Philippine presidential and vice presidential elections of 2022 are scheduled to be held on Monday, May 9, 2022, as part of that year’s general election. This will be the 17th direct presidential election in the Philippines since 1935 and the seventh sexennial presidential election since 1986. Incidentally, the year 1986 was the time of the EDSA Revolution and 1987 was the ratification of the Constitution.
We cannot miss the jockeying-up of positions for the bounty of becoming the next overseers or administration from 2022 to 2028. Being the main Administration means that they control the infrastructure projects and approves rather clandestinely the positions of influence and power in the government. This is a euphoric and real high for the people plucked from obscurity transformed into gods, demigods and patron saint of enriching kickbacks. Thus, after all these years, this is the very core of the problems of this country. The election based on money endearingly called BADIL, HUKIP, HATAG, comes as the Carcinogen that creates the ongoing social cancer that creates the low ranking educational standing, pawned sovereignty, selective justice, extra judicial killings and patronage and ultimately the dismay of the international community and the exodus of talented Filipinos to destinations abroad. During the heated Syrian Civil War many Filipinos opted to stay in that ravaged and war torn country than go back to our nation, the reason is clear.
With the upcoming elections a good 10 month ahead, we can sense the simmering and rising temperature of the tag-siring, because pure and simple it is where the money is. A running joke says that in this country to get rich you have to organize a sect or religion marry a rich foreigner or Afam and win an elective post.
Seemingly absent from the mindset of the candidates is the recent parameter for the selection of our new leaders, the PANDEMIC RESPONSE / READINESS SKILLS of the incumbent or the challenger.
The need for leaders to be adept with how to safeguard its people, lay good and workable plans for the on-going and may I say uncertain times. The media outlets are bringing up the good old days or press releases, but conspicuous absence of the parameter of the response, care and resilience towards the pandemic is being relegated to the back stage. We see headlines of squabbles or even war within parties, we see anointment and show of support but the pandemic was never a factor within the dynamics and orbit of things political.
Thus , let me remind everyone that quote of Victor Hugo the famous French Author and Social Activist “Nothing else in the world…not all the armies…is as powerful as an idea whose time has come. “To paraphrase the passage, nothing else in this world not even the biggest political party with the deepest of financial arsenal can deny that our biggest problem is not your chances of winning but the chances of people surviving in these times. It must be the next gold standards for leaders, the planned and track record for pandemic response.
After all, it’s about our chance of surviving in this infected world.