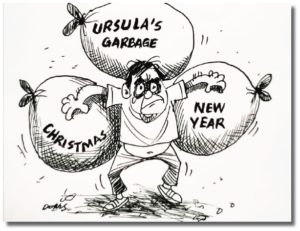 Normally, the twin holiday revelries of Christmas and New Year are already massive producers of accumulated trash on the streets. With the onslaught of typhoon Ursula, all the more that garbage mounds had proliferated.
This is in Tacloban City and nearby towns that lay along the typhoon’s path. Even before Christmas, the debris and garbage that the storm had scattered were already more than enough for the city to handle. Fallen trees, posts, houses, and other structures had created heaps of garbage everywhere, not to mention the dead bodies of animals that mixed with trash and water. When city residents woke up the next day, they removed these eyesores off their ways and dumped them in corners and along thoroughfares.
Then Christmas came, the day when people prepare plenty of foodstuffs and grocery items that altogether produce plenty of waste materials. In just a few days, new year followed, another big event to celebrate with abundant foods and drinks that eventually yield so much trash. These, plus the massive garbage piles that Ursula brought with it, had choked the city with these foul items from inside out.
Even up to now, piles of uncollected garbage still liter the city, plaguing the residents and passer-by with suffocating and toxic odors. Scavengers, both men and beasts, aggravate the problem by scattering these trash around. The city’s garbage collection task force just cannot grapple with the amounts of these wastes.
We can only blame this situation to the rubbish-producing phenomena earlier mentioned. But people also need to do their share of cleaning the city’s environment. We cannot just watch passively—we must help. 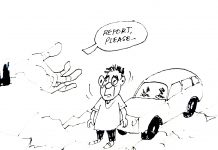 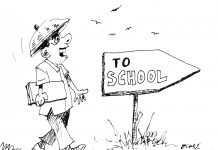