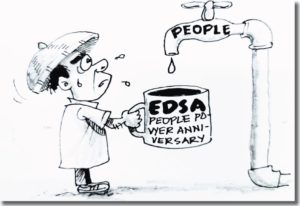 President Ferdinand Edralin Marcos dubbed by the opposition then and now as dictator was “driven out” of the country, February 25, 1986, 34 years ago. He has been in power for a little over 20 years. His ouster now is known as EDSA People Power Revolution of 1986, on charges of abuse of power, graft and corruption, political dynasty, human rights violations, freedom of the press, controlled even curtailed and many more. Every year from then on February 25 was celebrated with grand activities and participated in by Filipinos of Epifanio De los Santos Avenue (EDSA).
Year after year the celebration would appear losing its significance with apparent decrease of participants to a very low level and losing its colorful significance and getting exactly real dry. Why?
Looking back at the reasons why the EDSA People Power Revolution is happening like this now and so frustrating to notice is that almost the same negative issues in governmen remains alive today after the Cory, Ramos, Erap, GMA, Noynoy Aquino and Duterte administrations. In fact Filipinos who lived through these years and era are even saying that Marcos after all indeed is the best President this country ever had.
So, we observe a very dry and lifeless celebration of EDSA People Power Revolution after 34 solid years.