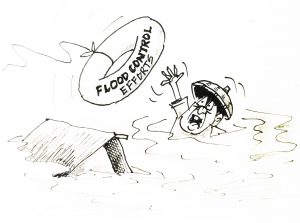 As of this writing, 27 deaths, 3 missing persons, and around 150,000 families have been affected by the low-pressure area (LPA) that continues to linger within the archipelago in the past days and weeks.

Being a part of natural calamities that frequent our islands every year, this weather disturbance is something we cannot help or avoid. But its effects could have been mitigated if not avoided. As can be noted, most of the casualties fell victim to the floods that had occurred in low-lying areas. It was this flooding that could have been avoided in populated areas.

In urban communities where these floods victimized more people, no drainage systems are big and wide enough to accommodate rising flood waters. It’s the projects such as these that local government units should prioritize and finance. If there is a need to create dams and irrigation canals that could lead the rising waters to the sea, then they have to create these.

Aside from building huge canals, the government should impose upon subdivision and residential building owners a policy that prohibits the dumping of filling materials that could trap natural waterways. Permit applications should not be approved unless the responsible construction firms have a working drainage system that goes directly to the sea. This way, flooding will be somehow resolved in prolonged rainfalls.

This is just an immediate response to the problem of flooding. If we want a long-term and sustainable flood control system, we should include reforestation and forest protection schemes among the options. This way, it’s not only flooding that could be mitigated, but landslides as well knowing that trees can strengthen the soil against erosion. These are just suggestions, but they make sense if we truly want to avoid casualties during flood occurrences.