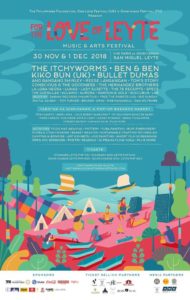 TACLOBAN CITY- “For the Love of Leyte” music and arts festival is set to bring “Woodstock-inspired” show in the province on November 30 to December 1, said co-founder and organizer Kay Veloso Palisoc.
Hosted in a sprawling private farm in Barangay Ginsiyaman in San Miguel, about 45-minute drive from Tacloban City, the festival will have two music stages, art grounds, and on-site camping featuring 27 bands that includes international musicians, popular OPM bands, and Waray artists.
“It will be an immersive two-day program of music, arts, and other cultural workshops,” said Palisoc.
The musical lineup includes Ben & Ben, Kiko Bun (U.K), Bullet Dumas, The Itchyworms, Babani Records (Mauritius), Reese Lansangan, Ang Bandang Shirley, Hernandez Brothers, Conscious & The Goodness, La Loba Negra, Free the Robots (U.S.), Irie Sunday, Lunas, Rob Mananquil, Tom’s Story, The 76 Receipts, KulaHig, LSR, Aurora, Maroon & Gold, Lady Suzette, Succubus, KRNK, Specs, The Guerillas, Digital Danboi (U.K), Bruder, and Tom Turner, among others.
“The festival is intended not only to showcase the talent and creativity of Leyteños to tourists and attendees but also to inspire and upskill Leyte artisans through learning from and collaborating with social entrepreneurs,” Palisoc told reporters on Nov. 21 in a media conference.
The concert-goers will also get free access to a trade fair and a series of workshops in “Tabo-an han Ginsiyaman.
“All festival attendees are promised of a one-of-a-kind musical experience and a glimpse of Leyte creative talent and the rich stories behind their craft,” said Palisoc.
“For the Love of Leyte’ is a movement that will showcase and increase accessibility of local artisans. Intended to be an annual gathering to celebrate and sustain creative talent in the region, it will harness the strength and resilience of Leyteños through tourism and livelihood opportunities. It aims to kick start long-term initiatives with the festival and for the years to come,” she added.
Tipay Caintic, Tabloban-born award-winning international fashion designer and the creative director of Tabo-an han Ginsiyaman, said they want to highlight the “creative livelihood” of the local artisans while collaborating and improving their craft through workshops during the show.
Aside from Caintic, other artists and exhibitors include Lolo Bobby Handicraft, My Souvenir De Basey, Eva Maries Arts & Craft, Upward Baybay, Kamay Ni Nanay, Mama Roots (Laguna), Mark Tamayo, Wang Yu Sajorda, and Abre Linea.
Workshops and activities during the event are tikog (native reed plant) hand weaving, tuba (coconut wine) painting, pottery, film screening, “sugba (grill)” and “utan (vegetable)” cooking, buri embroidery, open mic sessions, camping and bonfire, sketching, portraiture, and many more.
“We’re happy to be on board because we want to promote Leyte and Eastern Visayas as an ‘event destination’. We are celebrating the rebirth of Leyte after the devastation from Super Typhoon Yolanda,” said Patrick Buena of the Department of Tourism regional office.
Buena also lauded the organizers for advocating tourism and sustainable development through the festival.
“We did it in 2015 as a ‘send-off’ event mostly for the Yolanda humanitarian organizations. We want it to be continued for the new batch of travelers. It will be like ‘coming home’ to them,” said Palisoc while assuring the safety, security, and others resources needed for the event through the help of the local government unit of San Miguel.
Over 2,000 attendees are expected to join the event with the local communities supplying all the talent, goods and services behind the festival production. (RONALD O.REYES with LIZBETH ANN A.ABELLA)