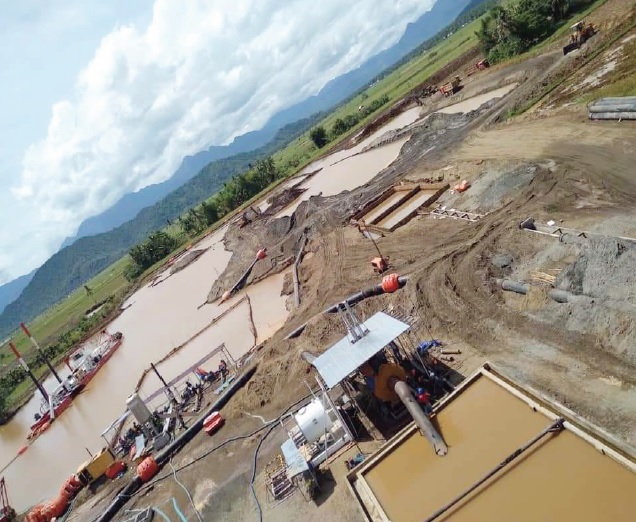 Catholic priest Amadeo Alvero took to social media to appeal for the stoppage of an alleged ongoing black sand mining operation in the small town of MacArthur in Leyte.
“I am pleading with my bended knees…This appeal I made in behalf of those who love and want to protect our environment,” said Alvero on November 19.
The MacArthur Iron Project Corp. (MIPC) was granted a mining permit by the Department of Environment and Natural Resources (DENR) and Mine and Geosciences Bureau (MGB) covering more than 2,000 hectares in MacArthur, Javier and Abuyog towns, all in Leyte.
In his open letter, the priest called on the attention of all municipal and provincial officials and concerned national agencies like the Department of Environment and Natural Resources (DENR) and Mine and Geosciences Bureau (MGB).
Alvero, the parish priest of the St. Isidore the Worker who is known for offering “door-to-door” confession and communion due to the pandemic lockdown, also recalled the recent “tremendous and great flooding in Cagayan, Manila, Marikina and many other places” which for him were aggravated by environmental-related destructions.
“If we protect the environment from destructions, the environment will protect us from destructions. If we protect the Mother Earth, our Mother Earth will protect us in return,” Alvero posted on his Facebook account.
The open letter, which went viral, gained support from the locals who thanked Alvero for tackling the issue.
“A brave one to express a concern for everyone’s welfare! No one will dare to expose this kind of activity for fear,” commented one social media user, who also wished for the priest safety and God’s blessing in his fight.
“I know and understand we cannot win our battle against the black sand mining without the help of our dear government leaders. And so I am humbly appealing to the deepest of their hearts to help us stop this black sand mining here in MacArthur, Leyte for the sake of those who have died and those who are still suffering because of the great flooding in Cagayan and many other places, and for the sake of those who will suffer and die in the future if we do not protect our environment,” Alvero further wrote.
MacArthur, named after American general Douglas MacArthur who liberated the Philippines during World War II following his historic naval landings in the shores of Leyte, is a fifth-class municipality in the province.
The small town, with a population of over 21,000 in the 2015 census, gained national attention when a fish kill struck its Lake Bito in 2012, decimating the livelihoods of its villagers while raising some questions about nearby mining safety during that time.
In November 2013, the town was also devastated by super typhoon Yolanda, which killed over 6,000 persons mostly in Leyte and Samar areas.
No to irresponsible
mining
Alvero maintained that he is not opposing mining, but only for the irresponsible ones.
“I am for anti-irresponsible mining, of which all the previous mining operations were irresponsible,” he told Leyte Samar Daily Express.
“That is why I oppose any mining, particularly black sand mining without first rehabilitation of all the previous mined areas–Barangays San Pedro, Pongon, Tuyo, and perhaps all the previously mined area in other towns, like Tolosa and Mayorga,” he added.
“If the said areas will be rehabilitated, maybe it will soften the heart of the locals,” Alvero said.
However, the priest did not identify any names of mining companies operating in the town.
In his Facebook account, Alvero also posted a video and photos which for him looked like ongoing black sand mining activities in the middle of farmland in Barangay Maya.
He asked whether the mining activities have the necessary government permits.
In a separate interview with Leyte Vice Governor Carlo Loreto, said that the one who would issue black sand mining concessions is MGB central office in Manila.
According to him, the issuance of concessions or permits for black sand mining is already strict and centralized from the start of the then president Benigno Aquino III.
According to MGB, MIPC’s processing plant has 4,000 tons of iron sand for debugging purposes and is expected to process 8-10% of its feed with a cut-off grade of 50.
Its process is physical separation of magnetite concentrate from raw sand via magnetic separators and sieve screens, it added.
As this developed, MIPC came forward on November 20, debunking the allegations of Father Alvero.
“The management of MIPC totally denies claims of Fr. Alvero’s baseless posts on Facebook generally implying that an existing mining operations in the municipality of Mac Arthur does not have valid permits and licenses from concerned government agencies,” the mining company said in a statement on November 20.
The management maintained that it has “secured all necessary permits, licenses and approvals necessary to bring the business operation to its current stage.”
It added that, as of the moment, “there is no commercial production yet” in the mining area.
“Equipment necessary for production has recently been assembled and are undergoing commissioning and debugging which makes shipment impossible as wrongly implied in social media,” the company said.
MIPC also reassured the public and all its stakeholders in Leyte, saying “we have performed our business operations within the bounds of law including all its pertinent policies and regulations, and we all continue doing so during the course of our business operations.”
“This includes the responsibilities of MIPC towards stakeholders by our operations and the environment around us. We will, especially, make good of our commitment to restore or bring the utilized lands to its stable and productive state before turning them over to landowners,” read the management’s statement to the media.
According to MIPC, it is a “new player” in mining activities in the town. (RONALD O. REYES)