TACLOBAN CITY- The mining activity in MacArthur town, Leyte has now reached the floors of the Sangguniang Panlalawigan with those opposing the operations seeking help for its stoppage.
On Thursday (Feb. 11), the committee on natural resources, chaired by board member Mecias Arevalo, conducted a hearing with both the oppositors and personnel of the MacArthur Iron Sand Project Corp. (MIPC) present to air their respective arguments.
Fr. Amadeo Alvero, the town parish priest who is leading in the fight against the mining operations, pleaded with the provincial officials to intervene and stop the activity in Barangay Maya of said town.
“I am appealing to the benevolent institution of the Sangguniang Panlalawigan to please stop the mining activity in MacArthur,” he said during the hearing that lasted for almost two hours which started at 11:20 am.
During the hearing, the committee through Vice Governor Carlo Loreto asked the two contending parties to submit documents to formally substantiate their respective claims for them to take action.
But Fr. Alvero said that the ongoing mining activity involving black sand extraction in MacArthur could result to destruction of the environment and affect food security of the town as the mining areas are considered as ‘prime agricultural lands’ producing palay.
In his pleadings, Alvero said that he is just consistent with one of the advocacies of the Church which is to protect the environment.
He also said that the town has a bad experience with previous mining activities, leaving behind their mining areas widely open and not being rehabilitated.
“MacArthur has experienced irresponsible mining activities. None of these mining companies conducted rehabilitation,” Alvero said.
But Januar Ong, communications officer of MICP, maintained that they are into ‘progressive mining operations.’
In fact, he said, after they extracted black sand from their mining areas, they immediately conducted back-filling using the same sand that they removed.
This way, the area would remain productive and could still be planted.
“(And) we cannot be held answerable to the sins of the previous mining companies. We are not connected to any of these mining companies. I think it is not fair for us to be labeled as irresponsible. We have just started our operation and in fact, we are now in the process of rehabilitation,” he said.
He asked those who opposes to give MIPC a chance to prove that they are sincere on their commitment to rehabilitate the affected mining areas.
As to other allegations made by Alvero like bribery involving certain officials, he could file appropriate charges against them in court, Ong said.
The MIPC has mining permit granted by the Mines and Geosciences Bureau (MGB) of the Department of Environment and Natural Resources (DENR) covering more than 2,000 hectares mostly in MacArthur town for 25 years.
Last January, the MIPC made its first shipment of black sand involving 39,000 metric tons to China.
The deposits were extracted from four out of the seven hectares ‘pilot areas’ which the company leased from local farmers for two years. 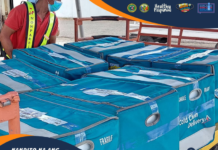