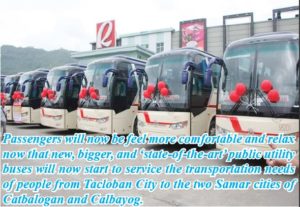 TACLOBAN CITY- About 10 units of public utility buses with routes from Tacloban to Calbayog and another 15 public utility coasters with routes from Tacloban to Catbalogan were launched on Wednesday (Feb.12) at the Tacloban City New Bus terminal in Abucay district.
The new fleet of public utility buses that will be plying from this city to the two Samar cities is in compliance to the program of the national government on public utility vehicle modernization program (PUVMP).
Land Transportation and Franchising Regulatory Board Chairman Atty. Martin Delgra III and Tacloban City Mayor Alfred S. Romualdez led the ceremony dubbed, “One Direction to PUV Modernization” with other transport stakeholders of the city.
The 25 modern PUV units which are compliant with the PUVMP requirements and specifications under the Omnibus Franchise Guidelines (OFG) and Philippine National Standards (PNS), have been granted provisional authority by the LTFRB to ply its service areas.
For the safety and convenience of passengers, the vehicles are equipped with speed limiters, GPS, CCTV, Wifi, comfort rooms, and an automated fare collection system.
Also in attendance during the launching were LTFRB 8 Director Gualberto Gualberto, Vice Mayor Jerry ‘Sambo’ Yaokasin and Councilors Aimee Grafil and Brian Steve Granados. (TACLOBAN CITY INFORMATION OFFICE)