A ‘Yolanda’ housing project hit by a landslide

TACLOBAN CITY– The low-pressure area (LPA)-induced rains have resulted in flooding and landslide incidents across the region Wednesday (Jan. 4).

In Salcedo town, Eastern Samar, a landslide that hit a ‘Yolanda’ resettlement in Barangay Tagbacan early morning destroyed a structure that served as a material recovery facility.
Linus Deguito, the information officer of the municipal government of Salcedo, said that the landslide could happen around 4 am with no persons injured due to the incident.

“The (resettlement site) is located in an elevated portion. No one was injured due to the landslide because the structure was unoccupied at that time,” he said in a phone interview.
Still, he said, the more than 100 families that now occupies at the said resettlement site which has over 300 housing units, especially those located near the landslide area, were ordered to be evacuated by the local government unit.

At least 47 families whose houses are located near the landslide area were evacuated to other houses still within the Salcedo Ville.

Deguito also said that several villages of the town have also been flooded due to the incessant rains spawned by the LPA.

Eastern Samar Governor Ben Evardone visited the site and promised to help the affected families, adding that he will inform the private entity that helped built the Salcedo Ville where families whose houses were damaged when Super Typhoon ‘Yolanda’ hit the area eight years ago.

Several local government units across the region suspended work and classes on Wednesday due to the continuous rains.

Here in Tacloban City, Mayor Alfred Romualdez issued an executive order at about 12 noon declaring the suspension of work.

Classes across the city were suspended by the school officials.

In Leyte, among the towns that also suspended work and classes were Palo, Abuyog, San Miguel, Santa Fe, Babatngon, Tolosa, Tanauan, Barugo, and the city of Ormoc.
A minor landslide was reported in Brgy. Tadoc, Abuyog town.

In Samar province, the municipalities of Basey, Calbiga and Paras likewise suspended works and classes while in Eastern Samar, the same order also took effect in Salcedo, Guiuan, Balangkayan, Balangiga, and Giporlos.

In Biliran, classes and work were also suspended in Naval town due to the continuous rains it experiences.

In Northern Samar, flooding incidents were reported in the towns of San Roque and San Isidro resulting in the suspension of classes.

A gale warning was also raised by the local Pagasa office reminding fishermen who are using small sea crafts, in particular, not to venture to the seas amid the turbulent weather.
To recall, during the massive and continuous rains experienced in Northern Samar during the Christmas, several fishermen were reported missing.

At least two fishermen from the province died while seven others remain to be missing.
In Eastern Samar, a landslide was reported in Barangay Siha, Borongan City due to the uninterrupted rain as flooding was also reported in the town of Quinapondan, particularly in the villages within the town proper.

The National Disaster Risk Reduction Management Council (NDRRMC) said that the entire Eastern Visayas region will be experiencing heavy rainfall that could result to flooding and landslide incidents. 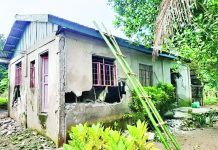