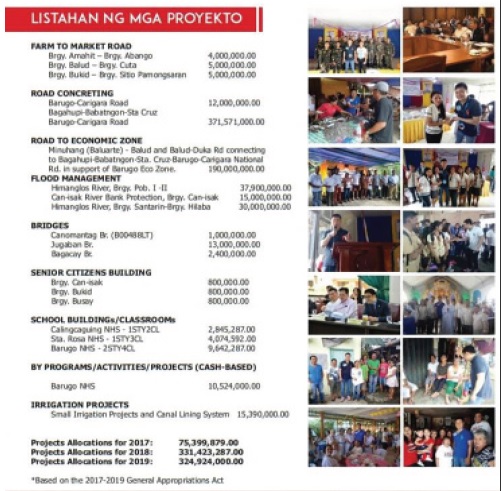 CARIGARA, Leyte- The supporters of Leyte second district Rep.Henry Ong in Carigara town vowed to deliver 90% of votes to assure him his second term.
The leaders and big families in this Leyte town convene last Saturday(April 20), to solidify their commitment in giving their 100% support of their representative “anak han Carigara”.
According to them, it will take many more years for an “anak han Carigara” to make it to Congress so they should support their own. Admittedly the group said that opposition is inevitable, thus, 90% of votes were committed by the group.
In the 2016 elections, Ong defeated veteran politician, then congressman Sergio Apostol, whose clan ruled the second district of Leyte for more than three decades.
The group believes that the Rep. Ong can do more for the district.
In his three year stint as congressman, Ong authored and co-authored 13 Republic Acts and 66 House bills.
Currently Ong is the chairman of the committee on banks and financial intermediaries and member of 12 committees at the House of Representative.
In Carigara alone, a total of P 3,588,913,513.00 based on 2017-2019 General Appropriations Act was allocated.
This for the construction of roads, roads to economic zone, bridges, flood management, port, drainage system, multi-purpose building, school buildings and classrooms, irrigation projects as well as cash based programs and activity projects.
“We are satisfied by his performance. We want him back. We will support “anak han Carigara,” they said.
(LIZBETH ANN A. ABELLA)