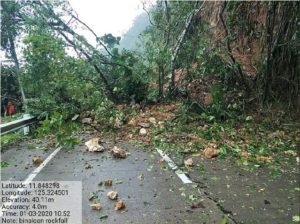 TACLOBAN CITY- Due to heavy rains, a landslide incident occurred along Barangay Binaloan, Taft town in Eastern Samar on Friday (Jan.3) morning.
Based on the information relayed by the Eastern Samar District Engineering Office (ESDEO) based in Borongan City, the landslide resulted to the uprooting of rocks and other debris with an estimated volume of 600 cubic meter.
It was learned that since Thursday night, heavy rains were being experienced across Eastern Samar which could have softened the limestones and soil that triggered the landslide and rockslide, ESDEO reports.
The office said that at around 9:30 am, the road leading the Paranas, Samar-Taft, Eastern Samar was rendered impassable to all types of vehicles.
The district engineering said that clearing operations will be done once the safety of their maintenance crew and operators are assured as rains continue to be experienced until today, Friday.
No one was reported due to the incident. (JAYSON ESPEJO/PR)