Calbayog is also under state of calamity 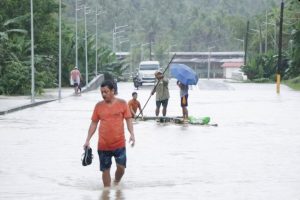 TACLOBAN CITY– The province of Eastern Samar was placed under a state of calamity on Thursday (Jan.13) due to the destructions it suffered due to the flooding and landslide incidents spawned by a low pressure area and the shear line.

The declaration was based on the recommendation of its provincial disaster risk reduction management council through a resolution and approved by Governor Ben Evardone.

With the declaration, the provincial government could make use of its quick response fund to provide assistance to the affected families and repair of damage infrastructures, it said.

The city government of Calbayog also declared a state of calamity on Friday claiming it sustained severe damages to its crops in the amount of P7.18 million and displacing 9,317 families due to flooding.

Based on the resolution, the inclement weather which Eastern Samar has been experiencing since December 24 of last year, has resulted to the destruction of various public roads and bridges across the province in the amount of P18 million while its agriculture sector, notably palay, sustained damage with an equivalent cost of P208.70 million.

The resolution also said that the incessant rains caused by the LPA and shear line also resulted in the deaths of three people and six others still missing.

The casualties were from the city of Borongan, two and one from San Julian town.
Meantime, the missing persons were from Dolores (3); Sulat (2); and one from Quinapondan.

Two persons, who were earlier declared as missing, one each from the towns of Quinapondan and Giporlos were rescued in Surigao and Southern Leyte, respectively.
Gov. Evardone has earlier called for assistance for the flood victims.

The Diocese of Borongan has also appealed to the public to provide help to those who were affected by the natural calamity.

“Some towns in Eastern Samar are affected by extreme flooding due to heavy rainfall. The families from the affected areas are in need of lifesaving supplies such as food packs, drinking water, and hygiene kits. Its time to help,” it said.

Out of its 22 municipalities, 18 were affected by the nonstop rain including its provincial capital of Borongan City.
(JOEY A. GABIETA/ROEL T. AMAZONA)