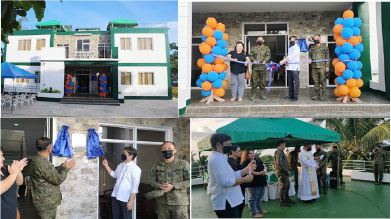 The P11.86 million project is a convergence project between DPWH and Department of National Defense (DND) under the “Tatag ng Imprastraktura para sa Kapayapaan at Seguridad” (TIKAS) program.

Works of the project involves the construction of a two (2) storey building with a total floor area of 421 sq.m. including painting and electrical works and provisions of Generator Set, Air Conditioning Units and Water Pumping System.

In an interview, Col. Peñaredondo thanked the DPWH for the implementation of the said project that greatly contribute in order for them to effectively and efficiently accomplish the organizations’ core purpose of serving the people.

BGEN Zosimo Oliveros underscored the importance of good environment in the development of personality.

“Ang TIKAS ay isa sa pinaka magandang proyekto, a convergence project between the Department of National Defense and the Department of Public Works and Highways (DPWH) under the Build Build Build Program of former President. While we are trained and operate in the jungle, we also deserve to stay in a good place after completing all operations. We need also to have better environment because for me the development of our personality, a certain or bigger percentage of that is a product of our environment. Malaking tulong na maganda yung ating facilities kasi maaliwalas yung pag-iisip natin at makapag relax tayo after sa mga trabaho natin.” BGEN. Oliveros said.

“We hope that this building serves as a transient quarter for our hard-working soldiers and serve a comfortable place to sleep or rest even when they are away from their homes,” DE Villena said.

He further hopes that the said project will uplift the morale of our hard-working soldiers for their selfless services to the nation especially in ensuring the security of the Filipino people.
“As defense front liners of the country, the TIKAS projects being implemented by DPWH will be a great support to our well-deserved colleagues in the Armed Forces,” he added.
(ANALIZA A. PABIA, PIO ALTERNATE)