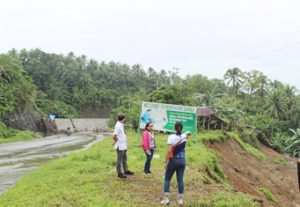 The reported damaged road slope protection has a total estimated length of 160meters with an estimated amount of Php 140M.

District Engineer Mario D. Villena immediately directed the Maintenance Engineer to submit report to the regional and Central office and request for appropriate funding for the immediate repair/rehabilitation of the said area.

“The road section is now vulnerable with higher risk of being totally cut-off if the collapsed slope protection is not reconstructed immediately,” said DE Villena.

For the meantime, the maintenance section installed road safety devices, barriers/signages to caution the travelling public in traversing said road section for their safety.
(ANALIZA A. PABIA, PIO ALTERNATE/PR)