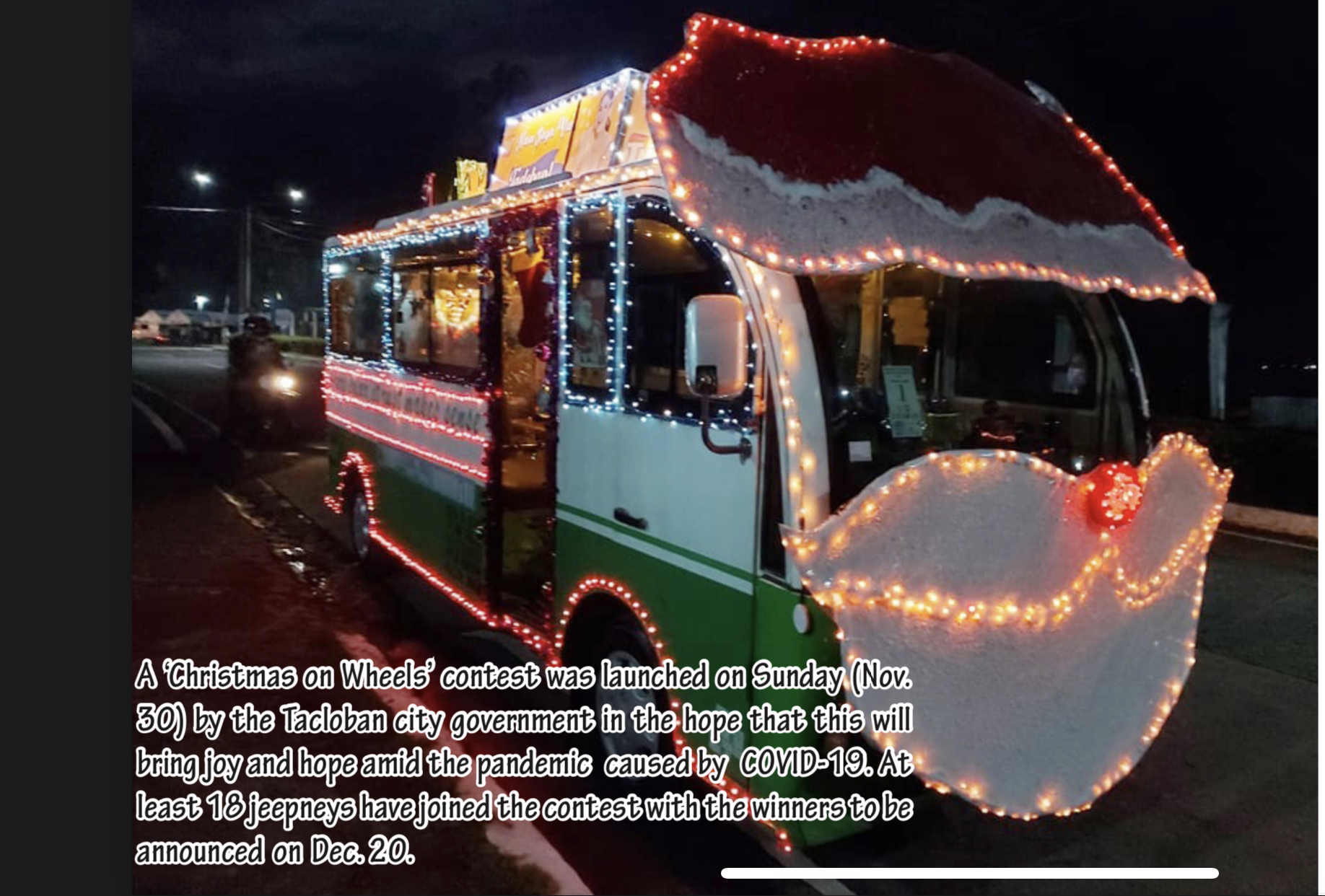 TACLOBAN CITY- This city glimmers with Christmas spirit during the launching of the Christmas on Wheels Competition 2020 in partnership with TNT / PLDT/Smart Telecommunications, Inc.
Eighteen lighted jeepneys paraded the metro during the pre-judging in the hope of winning the coveted prizes.
Councilor Aimee Grafil, representing Mayor Alfred S. Romualdez, in her speech, marveled at the resilience of Taclobanons who have been shaped by the challenges that they have faced and storms that they have weathered.
She said that she hopes that this activity will inspire and give hope to everyone in spite of the ‘darkness’ of the pandemic as she thanked the sponsors, partners, and organizers for their participation in this Yuletide activity.
Roy Nebrija of TNT explained that the activity will bring the spirit of the Christmas season to people’s barangays/homes without Taclobanons gathering in certain places if only to feel the spirit of the holidays.
He also expressed his thanks to the city government for the success of the first-ever Christmas on Wheels.
Driver Joey Oreno said in an interview, that he was encouraged by the jeepney’s operator to participate in this trailblazer event to boost every Taclobanons’ spirit despite having a tough year.
He excitedly shared that if he wins the prize, his family is in for a treat this Christmas and New Year’s.
Event sponsors are TNT, Uni-soft, Beybiko, Freeda, Cellcom, Panasonic, and RL Appliance in cooperation with Tingog Party-list, Rep. Martin Romualdez and his wife,  Rep. Yedda Romualdez, Land Transportation and Franchising and Regulatory Board, Land Transportation Office, City Tourism Operations Office, Traffic Operations Management, Enforcement and Control Office, Highway Patrol Group, Tacloban City Police Office, Leyte II Electric Company, Sangyaw Foundation, Love Radio, and BLS.
The contest will run through December, and winners will be announced on the 20th, at 6:30 pm at the CEO Gym. Criteria for judging are as follows:  Layout and design of the vehicle – 40%, and Visual lights effects – 60 %.
(TACLOBAN CITY INFORMATION OFFICE)