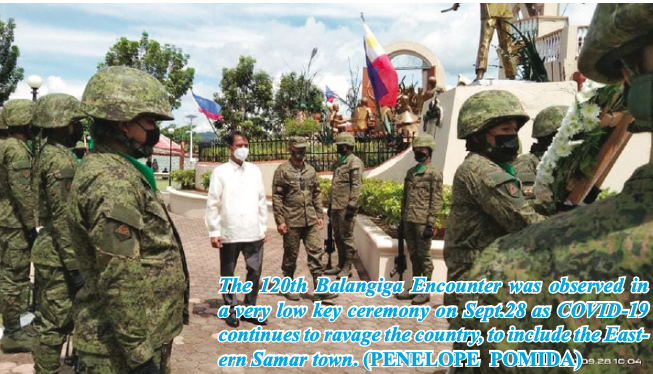 TACLOBAN CITY- The 120th anniversary of the Balangiga Encounter was remembered on Tuesday (Sept.28) without much fanfare with its main guest, Senator Cynthia Villar delivering her message virtually.
The very low key commemoration of America’s greatest defeat in the hands of Filipinos during the Filipino-American War was mainly due to the continuing scourge of coronavirus disease (COVID-19).
“The simplest so far because all of our visitors are from Eastern Samar. No national figures,” Fe Campanero, information officer of the municipal government, said.
The commemoration started with a Mass held at the St. Lawrence the Martyr followed with the blessing of the three bells enshrined at the grounds of the said church presided by parish priest Fr.Manny Lunario.
A wreath-laying ceremony led by Mayor Randy Graza was held at the monument of local hero Capt. Valeriano Abanador who led the uprising on Sept.28,1901.
A short program was held at the town’s gymnasium with its main guest, Sen. Villar delivering her message online. Several of mayors of the province were around with both Governor Ben Evardone and Rep. Ma. Fe Abunda, sending their respective representatives.
In her message, Villar paid tribute to the heroism and valour displayed by the Balangiganons 120 years ago.
Meantime, this year’s celebration of the Balangiga Encounter was also covered with sadness with the death of Donald “Bob” Couttie, a British national who helped in the campaign for the return of the bells from the possession of the Americans by writing books and articles regarding the bells and their return to the town of Balangiga.
The 71-year old died last September due to prostrate and lung cancers and was buried last Saturday (Sept.25) at the town’s public Catholic cemetery.
Couttie, who chose to live in Balangiga, married last year to widower Nita Mesa.
The bells of Balangiga were returned by the US government last December 11, 2018, 117 years after these artifacts were brought by the American forces.
(JOEY A. GABIETA)