After 117 years of waiting 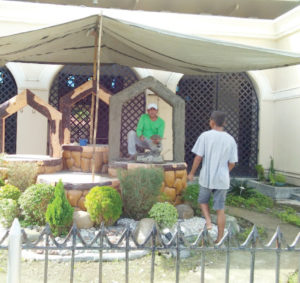 BALANGIGA, Eastern Samar- This town is in a frenzy as finally the bells taken away from their Church’s fry will be repatriated back to them.
Workers are sprucing the town’s plaza where a program for the turnover of the iconic Balangiga Bells is scheduled on Saturday (December 15).
The construction of the concrete stands where these three weighty bells are to be temporarily placed inside a small garden of the St. Lawrence The Martyr Parish are now finished.
To say that the town people are excited for the return of the bells-117 after these were forcibly removed by the American soldiers- is an understatement.
For Constancia Calesterio,62, the coming of the bells is like a realization on the stories surrounding on the removal of the artifacts as told by her late father when she was a child.
“He narrated the story why the bells were taken from our church belfry before we go to sleep at night. Now that these bells are to be returned to us, we are really, really excited. No words actually could describe how we feel right now,” Calesterio, who help write the script during the reenactment of the incident every September 28, said.
Calesterio’s father, Felipe (who died in 2013) was the son of Tomasa Abanador Campanero, niece of Captain Valeriano Abanador who led the attack to an American detachment on September 28,1901.
She also said that based on the accounts of her father, the sound of the bells was so strong that these could be heard all over Balangiga and neighboring towns.
The bells were used to signal their attack which resulted to the death of 54 American soldiers and 18 others were wounded.
An outraged American Gen. Jacob Smith deployed 180 soldiers on Sept. 29, 1901 and ordered them to turn the town into a “howling wilderness” where every Filipino male, at least 11 years old and capable of carrying firearms, was killed while communities were burned down.
The three bells are scheduled to be repatriated to the Philippines Tuesday (December 11) after 117 years displayed at FE Warren Air Base in Wyoming, USA.
Then, the artifacts are to be returned to this town on Saturday (Dec. 15), the start of the ‘Misa de Gallo’ ushering the nine-day countdown before Christmas Day on Dec.25.
Fittingly, the people of Balangiga calls the return of the three bells-one is in South Korea- as their ‘greatest Christmas gift’ ever.
Fe ‘Joy’ Campanero, town’s information and tourism officer, said that they have already laid a program which will start in the morning on Dec. 15.
She said that there will be some merry-making activities like street parade and showcase of local talents.
These activities will be done to ‘set the festive mood’ on the return of the bells, Campanero said.
And in the afternoon, President Rodrigo Duterte, to be joined by Defense Sec.Delfin Lorenzana and Foreign Affairs Sec.Teodoro Locsin Jr., will turn over the bells to the St. Lawrence The Martyr Parish to be accepted by its parish priest, Serafin Tybaco, Jr. in a simple ceremony.
Flowers will be drop from helicopters and the bells, after over a century, will be ringed simultaneously together with the current bells at the Church’s belfry.
The singing of the National Anthem will be done by a chorale group to be brought by the Department of National Defense.
Fr. Tybaco said that turnover will be followed by a Mass to be presided by Bishop Crispin Varquez of the Borongan Diocese.
Bishop Varquez will be joined by his immediate predecessor, Bishop Leonardo Medroso, who in his time joined in the call for the return of the bells, and Bishop Rex Ramirez, a native of the town but is now the bishop of Naval Diocese.
Campanero said that it is not yet certain where the bells-each approximately weighing 300 kilograms- will be arriving.
She said that the bells, loaded in a government-owned plane, may be downloaded at the Daniel Z. Romualdez Airport in Tacloban City or in an airport made by the Americans during the World War II in Guiuan town, also in Eastern Samar.
Tacloban City is about two hours of land travel to this town while it will take only an hour from Guiuan to reach this town.
The three historic bells are to be temporarily placed in a concrete stands at the Church’s grounds for the people to touch and in this age of ‘selfies’ to take photos.
These will eventually be placed at the belfry of St. Lawrence The Martyr Church.
For Calesterio, Campanero and the rest of the people of Balangiga, the return of the bells closes a chapter of the town whose ancestors stood up to defend and fight for their rights and the same time, will help further the ties that bind between the Philippines and the United States.