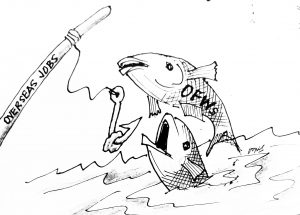 After decades of losing healthcare professionals to other countries, it is only now that the Department of Health (DOH) seems to have finally realized that these workers are so important, especially in caring for our own people’s health.

It’s been a trend in the country for so many decades already—professionals in various fields go abroad in search of better employment opportunities that fairly compensate them for their hard work and skills. They sacrifice their families to the point of destroying the latter just because they want to earn better, which is a hard and risky decision to make on their part.

Realizing that we are running short of healthcare professionals, and aware of the very reasons why this sector is being drawn overseas, the DOH has bared its plans to increase the salaries and benefits of these workers so that, somehow, they would not be tempted to leave; so that they would stay in their own country for good.

Such development is good news, indeed, that healthcare workers would undoubtedly welcome. They have been among the lowest-paid workers, especially the nurses. Given better pay in the country, they would not be so attracted anymore to overseas jobs for which they suffer untold cases of discrimination, abuse, maltreatment, and even death, particularly in hostile, Arab countries.

As this develops, we are hoping that other government agencies will likewise attend to the same need of increasing the employees’ wages so that all sectors in government will not experience a similar brain drain or the loss of productive, talented, and skilled workers that, given better benefits, could surely help in making our country great.