TACLOBAN CITY- For Alex Toongo, Barangay Kantagnos will now just be a part of his life, albeit a harrowing one.
Kantagnos, a farming village with more than 600 residents around 15 kms away from the city proper of Baybay, has been deemed to be not fit for occupancy after it was hit by deadly landslides on April 10.
A top geologist from the regional office of the Bureau of Mines and Geosciences (MGB) said that they have recommended and considered Kantagnos too hazardous for a community to live in.
“I have no intention to return there in Kantagnos. I am afraid what happened to us on that day will happen again as there are cracks seen at Mt. Mastalisik,” Toongo, a village councilor, said.
The heavy volume of mud, rocks, and fallen trees that cascaded down to the houses were from Mt. Mastalisik.
He, however, felt grateful that his family-his wife, and three children- managed to survive the two landslide incidents in the village- the first happened at around 5 am and the second incident almost two hours later.
“We were able to survive on the first landslide incident by going up to a higher ground and exited to the next village of Ambacan,” Toongo,57, said.
His family, together with other residents of the village who survived the onslaught, are temporarily housed at the Baybay City Senior High School which was visited by Pres. Rodrigo Duterte last Good Friday (April 15).
The MGB, speaking through its chief geologist Celestina Caranza, said that they have recommended to the city government of Baybay to condemn Kantagos as possible similar incidents may happen again.
Caranza said that the village is among the 87 percent areas of Baybay which have been classified to be moderate to high risk of landslide. The city, which is generally mountainous, has 92 barangays.
“Our recommendation is not to allow the community to reside there because it is now too hazardous. (In fact) our recommendation is for all areas classified to be high risk, even moderate, to a landslide for the city government hindi na pwede tirhan,” she said.
“If ever na babalik sila, they should be vigilant on their environment and be observant of cracks and tilting of trees (which are indications of possible landslide),” Caranza added.
She said that the city government should try to ‘revisit’ its CLUP or comprehensive land use plan to avoid similar incidents and settle villagers away from natural calamities.
Caranza said that the landslide incidents in Kantagnos, considered to be the worst-hit area due to tropical depression ‘Agaton’ were water-induced due to the sheer big volume of rainwater it dumped.
The Philippine Atmospheric, Geophysical and Astronomical Services Administration (Pagasa) office in Tacloban said that based on their monitoring of the volume of rain experienced by Baybay City prior to Agaton’s fury on April 10 was comparatively higher than its monthly average of 131.2 ml.
Mario Peñaranda, Pagasa station chief, said that on that day, the rainfall was registered at 536.2 ml and a day before (April 9), at 173.2 ml.
In fact, he said, from April 1 to 12, when continuous rains were experienced by the city, its rainfall was recorded at 1,081.7 ml.
“It is so way above from its average monthly rainfall. So we can really say that the landslide incidents there in Baybay were water-induced,” Peñaranda said.
But for Pacencia Milan, a known environmentalist based in Baybay City, the landslide incidents in the city, affecting over 10 barangays, could also be attributed to almost lack of vegetation which resulted for rainwater to easily topple trees.
Milan, also a former president of the Visayas State University, disclosed that in Kantagnos, illegal poaching has been reported to exist.
“There was continuous rain for three to four days, and there were not enough trees to hold (the rain) water reason why water and other vegetation pushed the houses down,” she said.
Toongo confirmed the statement of Milan on the existence of logging activity in their village.
“There was a concessionaire there. I even worked there as a heavy equipment operator. In fact, one of its backhoes was used in the clearing operation,” he said.
He, however, declined to provide more details on this bit of information.
Milan said that she hopes that what happened will serve as a ‘wake-up call’ for the city government, in particular.
“I hope this will serve as a wake-up call for the local government. Hope they will be conscious of replenishing the trees. There is no forest restoration here in Baybay,” she said, amid its various ongoing infrastructures like roads and highways.
For Jose Cala, another local environmentalist, the city government should come up with a multi-sectoral forest protection committee to help preserve the city’s vegetation and in the process, could lead to at least minimal impact of future landslide or even flooding incidents.
“Illegal loggers wantonly cut trees leaving only shrubs and trees which could not hold big volume of trees,” he said, adding that what happened last week was kind of waiting to happen.
Meantime, it was learned that Mayor Jose Cari is also considering of declaring Kantagnos a ‘no man’s land’ as he asked the MGB to make an assessment of other villages as well hit by the landslide incidents.
As of Friday morning, the city disaster risk reduction management office (CDRRMO) said that the death toll in Baybay now stands at 127 with Kantagnos posting the highest number of fatalities at 66 with 56 still missing.
The retrieval operation in the village will still continue based on the recommendation of the CDRRMO. (JOEY A. GABIETA) 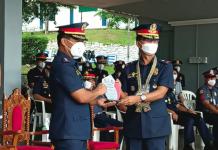 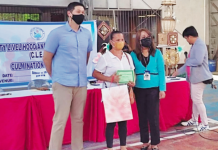 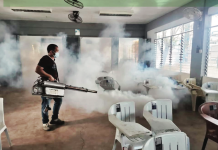 Gov. Petilla proposes protocol for the return of face-to-face classes

Gov. Petilla proposes protocol for the return of face-to-face classes