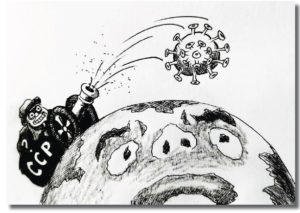 Many Western media, health, and political organizations are now naming the COVID-19 as CCP Virus, which stands for Chinese Communist Party (CCP). This, accordingly, is the most appropriate name after numerous proofs had surfaced, from the ongoing proves, that the present corona virus came from a Wuhan laboratory, not from a wet market as previously reported.
If it were true that this virus didn’t originate from a wet market, which does not exist there based on reports, then that virus must have been the handiwork of the Chinese regime, which directs and controls research activities throughout the country. And, for sure, it must be for crucial reasons that this virus was created; reasons that work to the regime’s great advantage in various ways over other countries.
At first, the Chinese government protested against the idea of naming it as Wuhan Virus for its racist implications. With the help and guidance of World Health Organization (WHO), another body accused of acting as China’s mouthpiece, they came up with the name COVID-19, which was immediately and widely used afterwards. This new name then is far safer and does not implicate any race or nation.
But with the many evidences pointing to the CCP’s role in the production and spread of the virus worldwide—many of which had been suppressed, covered up, and destroyed, in fact—full-scale investigations were still able to gather pieces of documents, images, and other proofs that the CCP was behind such virus production, no wonder why the regime had had plenty of preparations made to combat a global pandemic, such as the prior stockpiling of safety kits, masks, and suits.
As to the likely question of why would the CCP create and spread such a virus, one answer could be its glaring militarization of strategic locations like the West Philippine Sea, the grabbing of other countries’ territories, and the strengthening of their defenses while the potentially powerful rivals are desperately crippled by the deadly pandemic—the CCP virus.

DSWD in EV marks the enactment of 4Ps law; honored partners in the implementation...

Naval LGU to hire teachers for students of special needs