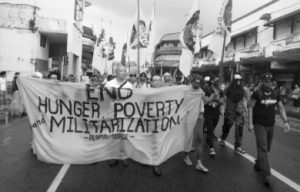 TACLOBAN CITY- An alliance composed of storm survivors has called President Rodrigo Duterte as “inutile” as the nation marked the fifth anniversary of the onslaught of super typhoon ‘Yolanda’ on Thursday (Nov.8).
Efleda Bautista, the president of People Surge, said that the past five years since Yolanda hit Eastern Visayas “was supposed to be enough for the recovery and rehabilitation phase of the region.”
Yet for the People Surge, they marked the Yolanda rehabilitation under Pres. Duterte as “slow-paced, segmented and anti-people” and likened it to what happened during the time of his predecessor President Benigno Aquino III.
“We are more than ready to occupy once again the streets of Tacloban, rain or shine, to air out our state and our demands. We are the Yolanda survivors and we are ready to surge,” said Bautista.
Bautista said that “there is a zero percent progress in the government’s bogus Yolanda rehabilitation project.”
“The project is only aimed at attracting investors and creating businesses profiteering from the people’s vulnerability to disasters,” she said.
The People Surge official disclosed that Yolanda housing project in the region “remains incomplete while relocated families still suffering from the lack of basic utilities and livelihood.”
Aside from the criticizing the “bugled” rehabilitation in the region, Bautista also hit the increasing prices of commodities particularly the rice, saying this “is a result of the government’s neglect over the agriculture sector, most affected in times of disasters.”
But for former Special Assistant to the President Christopher ‘Bong’ Go, the recovery is “fast” in Tacloban and Leyte.
He added that Duterte is “always thinking about the betterment of the Filipino people.”
In his speech during his visit to the city on Wednesday (Nov.7), Go recalled how Mr. Duterte, then the mayor of Davao City, immediately arrived in Tacloban to deliver help to the Yolanda victims and ordered for the continuation of the rehabilitation during his administration.
He said that housing “is now 80 percent complete” in the different resettlement sites at the northern part of Tacloban.
These resettlement sites also have an electric connection while its water system is on its bidding process, Go added.
Go also highlighted the 27. 3-kilometer tide embankment project under Duterte which aims to protect some 30,800 houses and infrastructures in Tacloban-Palo-Tanauan areas from similar storm surge in the future.
(RONALD O.REYES)