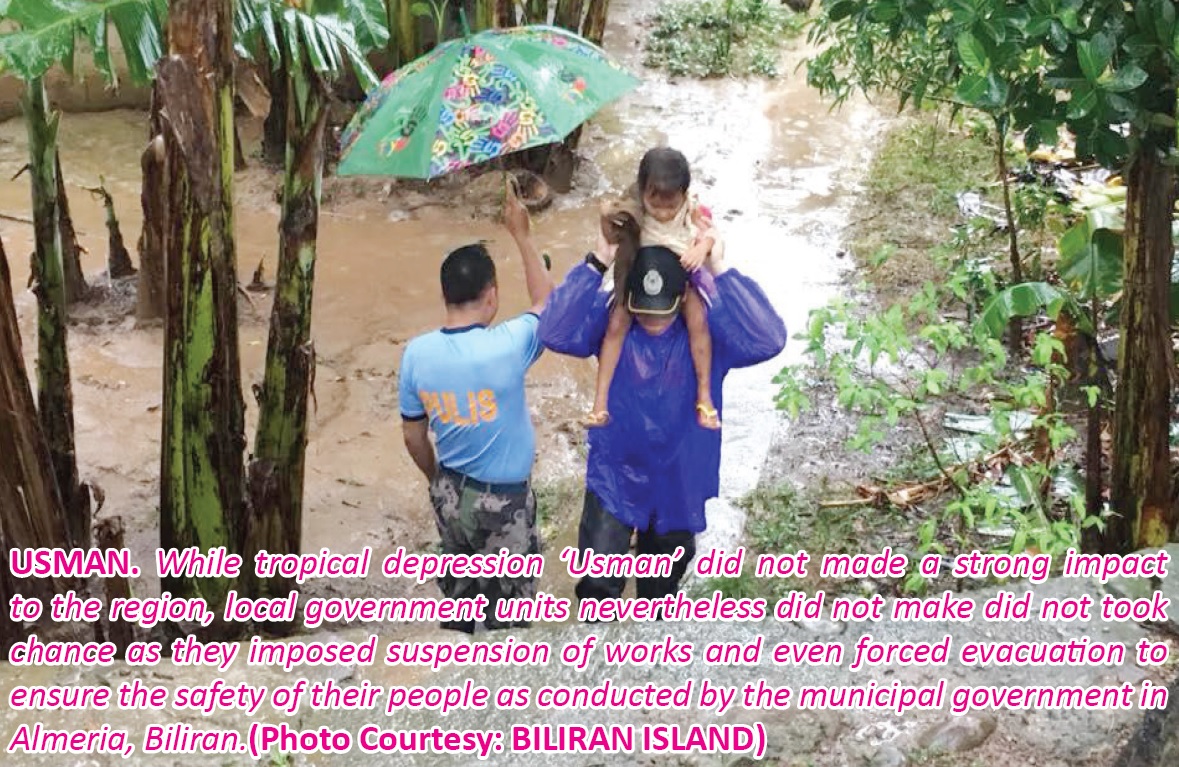 TACLOBAN CITY-Work in both public and private offices were suspended in various areas here in the region on Friday (Dec. 28) amid threat of tropical depression ‘Usman.’
Also, over 3,000 passengers were stranded in the different ports as the Coast Guard implemented a ‘no sailing policy’ as Eastern Visayas was placed under signal number 1.
Work in government offices were suspended by Tacloban City Mayor Cristina Romualdez while the suspension in Catbalogan City, and Pinabacdao, both in Samar; and Guiuan and Borongan, both in Eastern Samar, covered also those in private offices as directed by their respective local government units.
About 13 families (78 persons) from Barangay Lico, Naval in Biliran province, were evacuated to safer ground due to the threat of a possible landslide incident.
Another 58 families or 274 persons from the villages of Sto, Niño,Calumpang, and Santisimo Rosario, all in Naval, were evacuated.
The Coast Guard in the region has reported that 4,511 passengers were also stranded in the ports of San Isidro and Allen, both in Northern Samar; Ormoc City in Leyte; and in Liloan in Southern Leyte.
The municipal government in Almeria, Biliran conducted a forced evacuation in its four barangays identified prone to flooding and landslide incidents, Richard Sanoy, municipal disaster risk reduction management officer, said in a phone interview.
Sanoy said that they started their forced evacuation at about 8 am on Friday and is expected to end before the onset of darkness.
“We are being joined by personnel from the Philippine National Police and Bureau of Fire as many of the residents does not like to leave their houses. In fact, we’re forced to tie the hands of those who really does not cooperate with us,” he said, adding that they are only for their safety.
Sanoy said that about 200 families or about 1,200 persons were affected by their forced evacuation coming from the villages of Talahid, Poblacion, Salangi and Iyusan.
To recall, the town of Almeria was among the most devastated areas when Biliran province was hit by typhoon ‘Urduja’ December of last year.
About 13 people died, mostly from Salangi and Iyusan, due to the landslide incident as a result of Urduja’s onslaught.
(JOEY A. GABIETA with RONALD O. REYES)