NSSDEO, Brgy. Burabud, Laoang, Northern Samar-– “No substantial damage to the roads and bridges under the jurisdiction of the Department of Public Works and Highways Northern Samar 2nd District Engineering Office and the same are passable to all types of vehicles.” 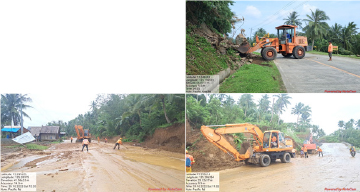 This was the content of the TS “Paeng” situational report submitted by OIC-District Engineer Charlito Carlobos to Director Edgar Tabacon of DPWH-RO VIII in Baras, Palo, Leyte.

Earlier, Engr. Nicanor L. Mejos Jr., assistant chief of the NSSDEO Maintenance Section and member of the District Disaster Risk Reduction Management Team (DDRRMT) said that even during the occurrence of the storm, NSSDEO field personnel led by the Maintenance Point Persons (MPPs) conducted an actual inspection and monitoring of the roads and bridges of NSSDEO.

So far, Engr. Mejos said there were only slight or minor soil collapse and landslide along the Palapag-Mapanas-Gamay-Lapinig (PAMAGALA) Road.

However, these did not hamper the normal flow of traffic in the area because of the immediate response of the field labourers equipped with DPWH dump trucks, back hoe and pay loaders in the area.

“No damage to all infrastructure projects including roads and bridges in all areas of jurisdiction of the DPWH Northern Samar 2nd District Engineering Office during Typhoon “Paeng”,” said DE Carlobos.
(LYCA MAE T. QUILICOL, PIO Alternate)