Policy aims to make Tacloban a clean and healthy city 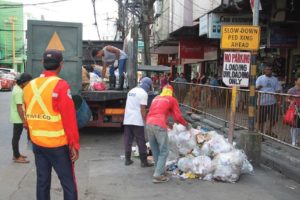 TACLOBAN CITY- For almost two weeks now, the city government here has been implementing it’s ‘no segregation, no collection policy’ on waste disposal.
And so far, the result appears to be encouraging, said city environment and natural resources officer Jonathan Hijada.
According to Hijada, the policy first introduced on Feb.24, is being strictly imposed by the city government of Mayor Alfred Romualdez not only to comply the country’s solid waste management law as contained under Republic Act 9003 but more so to expand the usefulness of its sanitary landfill and also help save the city in millions of pesos that could be better used in the delivery of other basic services.
Under the no segregation, no collection policy, the city garbage collectors would only collect if the residual wastes like diapers, kitchen wastes, sanitary pads, and soiled items and the non-recyclable wastes are placed in separate garbage bags or containers.
These collected wastes are then deposited at the city’s sanitary landfill and its decomposting facility.
Otherwise, these would not be collected with violators to be fined from P500 up to P1,000 and community service, depending on the number of violation committed.
“We want cooperation from our barangay leaders and our people. We don’ want to reach to the point that we will be filing complaint against anyone who will not follow this policy,” Hijada said as he appealed to the public to practice at their own backyard or barangay decomposting.
“We want to impose discipline among our people and make Tacloban City a healthy and clean city,” he added.
Hijada said that if this policy would be strictly followed by the city residents, the city government, in turn, could save millions of funds which could be better used to help improve the delivery of basic services.
And since they have started the policy, around 100 violators have been fine.
It was learned from Hijada that the city government allocates around P80 million for garbage collection and the maintenance of its sanitary landfill.
But if this policy would be followed, only 30 percent of the P80 million would be used by the city government on waste collection and landfill management.
Hijada said that based on their waste management analysis and study, out of the city’s 115 tons a day of garbage, 65 percent are considered be residual and 11 percent recyclables which could just be buried or decompost instead of throwing them at the city’s sanitary landfill located in Barangay San Roque.
If these 75 percent residual and recyclable wastes would just be buried or decompost, this would help extend the lifespan of the city’s sanitary landfill from just eight years to about 11 years, the official said.
Thus, only 24 percent or about 27 tons a day would be deposited at the city’s sanitary landfill, Hijada added.
These residual wastes, in turn, are being converted into organic fertilizers which the city government are to give to those who are into organic farming.(JOEY A. GABIETA)