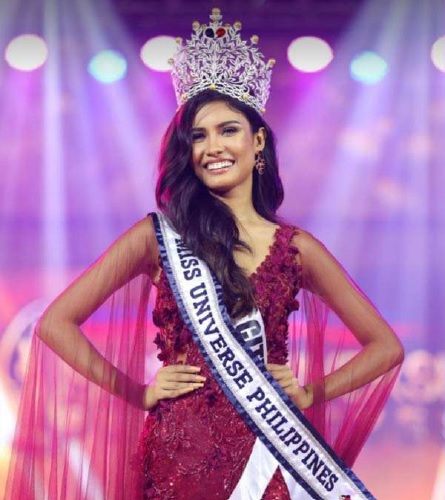 Rabiya Mateo of Iloilo City bested more than 40 candidates to win the Miss Universe Philippines 2020 title.
The 23-year-old beauty queen was crowned during the grand coronation held at the Baguio Country Club in Baguio City Sunday (Oct.25).
Miss Universe Philippines 2019 Gazini Ganados crowned Mateo.
Besides the crown made of diamonds, yellow pearls, sapphire, ruby and topaz, Mateo also won a brand new car and various endorsement deals.
Mateo graduated cum laude from the Iloilo Doctors College with a bachelor of science degree in physical therapy. She currently works as a coordinator and lecturer for a Manila-based review center.
The Filipina-Indian beauty was among the top contenders. She won the Best in Swimsuit in the preliminary competitions.
On pageant night, Mateo charmed the panel of judges that included Miss Universe 2012 first runner-up Janine Tugonon, Miss Universe 2013 third runner-up Ariella Arida, ACT-CIS Rep. Eric Yap, Palace spokesman Harry Roque Jr., Baguio first lady Arlene Magalong, Jackie Aquino, Samuel Salonga Versoza Jr., Raymond de los Santos, Venus Navalta and Arthur Peña.
She further stood out when asked “If you could create a new paper currency, with the image of any Filipina on it — dead or alive — who would it be and why?”
Mateo answered, “If I were given the chance I want to use the face of Miriam Defensor-Santiago. For those who don’t know, she was an Ilongga, but what I admired about her is that she used her knowledge, her voice to serve the country. And I want to be somebody like her, somebody who puts her heart, her passion into action.”
A unique twist to the competition, Mateo was immediately asked of the generic question that other competitors also had to answer, “This pandemic has made clear our priorities, essential or non-essential. Where do pageants stand in this time of crisis?”
“As a candidate, I know I’m not just the face of Iloilo City. But I am here, carrying hope and as a symbol of light in the darkest times. And as of the moment, I want to help my community, I want to use my strength to make an impact. And that is the essence of beauty pageant — it gives us the power to make a difference.”
The other winners were Maria Ysabella Ysmael of Parañaque City, first runner-up; Michele Gumabao of Quezon City, second runner-up; Pauline Amelinckx of Bohol, third runner-up; and Billie Hakenson of Cavite, fourth runner-up.
Biliran’s Skilly Ivory Florida managed to sneak in the top 16.
Mateo will represent the country in the upcoming Miss Universe, the date and venue of which are yet to be announced.