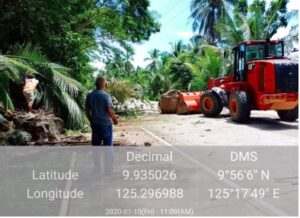 MAASIN CITY – A portion of the road in San Ricardo, Southern Leyte blocked by landslide and rockslide debris on Thursday(July 9) is now passable after the clearing operation of the Department of Public Works and Highways.
Southern Leyte district engineering office chief Ma. Margarita Junia said traffic flow has already been restored in Barangay Camang in San Ricardo town early this morning, July 13.
“I received information last night from my maintenance point person about the landslide along San Ricardo road. Upon being notified about the incident, I immediately directed our maintenance workers to clear the area from blockage because the road is a vital link,” Junia said.
The road section leads to Benit Port, the region’s exit point to Mindanao. It is also considered a vital link from Leyte to Mindanao as part of the nautical highway’s eastern seaboard route.
The landslide which occurred on Thursday night was caused by the non-stop heavy downpour in the province this week.
The DPWH field office is stepping up their monitoring in landslide prone areas in Pacific towns and Panaon Island during rainy days. They also assigned workers in vulnerable sections as well as prepositioned equipment in anticipation of rainfall-induced landslides. (PR/FMMT)